The latest mobile trend data is showing that as a society, we’re hungry people…

and it’s not just for the food in our refrigerator; it’s for connected devices and digital content. We absolutely love our smartphones and tablets and we’re using these gadgets to do a growing number of things. From the moment a mobile gadget alarm goes off in the morning to the last time messages are checked at night, these devices have become extremely central to our lives, to the point that most of us don’t know exactly how we’d live without them.

One of the largest reflections of these mobile technology trends occurred very recently when Google put its foot down and decided to stop simply encouraging site owners to make their websites smartphone friendly. They actually started punishing those that didn’t do it. The so-called “mobilegeddon” that took place on April 21, 2015 was the date when the search engine giant changed its search rankings for smartphone and tablet based queries so that mobile friendly websites would be preferred in the results over those that are formatted exclusively for the standard web.

This is because smartphones have become a device that is becoming as commonplace as the refrigerator. 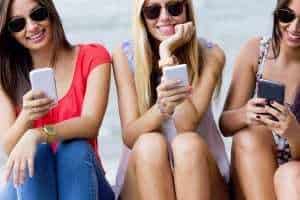 We can’t imagine how we would live without either of them, and when they aren’t working, it can cause a serious disaster in our lives. Moreover, the rise of these devices has happened at a staggering rate, just as those major appliances did. Consider the fact that at the start of the Great Depression in the early 1930s, it’s estimated that only 8 percent of American homes had a fridge. By the end of that decade, despite the staggering financial struggles faced by most families, 44 percent of households had them.

The same thing is happening with smartphones. The smartphone has now been on the market for about 20 years (and has certainly traveled light years since its original archaic form which doesn’t even compare to today’s devices) and it is now estimated By Pew Research that as of April 2015, almost 2 out of every 3 Americans own one. In fact, by the start of 2014, comScore had already reported a mobile trend that showed that internet usage via smartphones and tablets had exceeded that of desktops and laptops.

Our communication – a basic component of society – has been evolving through mobile technology trends, as emojis start to become a regular part of text conversation. Microsoft has even taken the step to include a “middle finger” emoji in the emoticons that it will be releasing this summer with Windows 10.

Dan Leves, the CFO of Mogix portable battery chargers, explained that “I see a very important need for longer battery life since we’re now using our smartphones for just about everything. It’s not just talking and texting, anymore. We’re playing games, shopping, and surfing, too. Running out of charge just isn’t an option.”

With this mobile trend toward a growing dependence on smartphones and tablets, keeping devices charged is also increasingly important. Portable cell phone chargers are becoming the next most vital mobile gadget on peoples’ lists.