Speed, comprehension, and literacy as a whole could benefit from this type of advancement.

As though literacy wasn’t important enough before the internet came along, nowadays, emails, websites, SMS and other forms of text through online and mobile technology have placed thousands of words in front of our eyes every day.

Now, a new form of tech has been developed by Spritz, to help to speed that process along.

Spritz has come up with a form of text streaming mobile technology that could help a reader to be able to read a great deal more in a much smaller amount of time. This tech works by streaming text onto a screen a single word at a time. According to the company, this allows the brain to be able to absorb and understand what is being read in a much faster and easier way. Their tagline, which has been trademarked, is “Reading Reimagined,” and that’s exactly what their development appears to be.

This mobile technology allows reading and comprehension to occur more quickly than through traditional means. 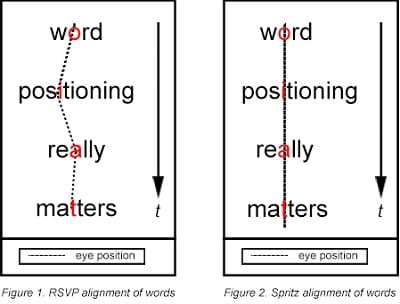 The foundation of the Spritz technique is what the company has called the “Optimal Recognition Point” (ORP). The claim is that the brain is able to process the information that it is absorbing once the eyes have achieved the ORP of any specific word that they see. The brain is then trained to create a coherent, complete thought about the words that have been read once it reaches the punctuation point that closes the statement.

That said, Spritz has also explained that 80 percent of the time that is spent while reading is devoted not to comprehension, but is instead used exclusively for the actual movements of the eye from one word to the next, seeking the ORP. This leaves only the remaining 20 percent of the time for the processing of the information. In order to speed up the reading process as a whole, text is reformatted by Spritz so that it can be aligned based on a reader’s ORP, so that the eye never really needs to move in order to read the text. This near elimination of the requirement for eye movements means that a much higher percentage of the time spent reading can actually be used for the absorption of the data and the comprehension of what it has to say.

While this functions well on a standard computer screen, it is clear that there will be a great deal of potential for this method in upcoming mobile technology, particularly in wearables such as augmented reality glasses, among others.