Users of the public transit system can use NFC technology based transactions to pay for fare.

The public transit system in Montreal, Canada has started to test the use of mobile payments using NFC technology in Android based devices so that riders can pay for their fare on some buses and trains.

This has been made possible through a partnership with Suretap, a mobile wallet owned by major Canadian wireless network operators.

According to the Société de transport de Montréal (STM), the mobile payments system will initially be available to a few hundred of its own employees so it can be thoroughly tested out before it is released to the general ridership. There has not yet been any announcement with regards to when regular riders will be able to use the service to pay for their own fares. The chairman of the STM, Philippe Schnobb, explained that “We want to make it simple for customers to get access to our installations and to our network and this is another way.”

The current mobile payments tests are being used “to make sure it works in real life,” said Schnobb. 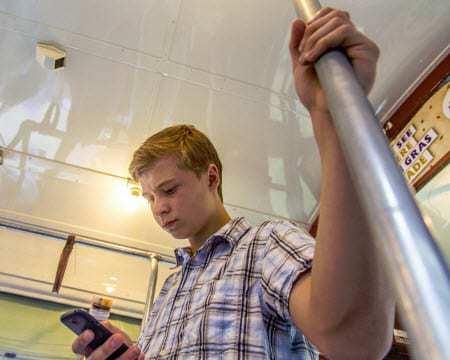 If the system is found to work and it is implemented, it will mean that commuters will be able to use their smartphones as mobile wallets so they can pay for their fares on buses or trains instead of using their OPUS cards as they currently do. At the moment, the companies behind the technology are taking on the cost of developing and testing the service. The STM is not footing the bill for this tech.

Schnobb explained that “We made our facilities available to those who made the proposal, because we’re all interested in developing the technology.”

The initial design of the mobile payments system is such that it is being texted exclusively on Android devices. At the moment, it is entirely incompatible with iPhones. The reason is that it uses NFC technology and while that tech has been embedded into the most recent iPhones, Apple does not allow third party organizations – such as the Montreal transit system – to access it for uses such as payment transactions and ticketing.