Retailers have yet to achieve consistent large sales through smartphone shoppers.

Though there has been considerable hype around the subject of mcommerce over the last while, many retailers have yet to feel excited about the channel, as they aren’t yet seeing sales that make them feel that all of the effort, funds, and resources that it requires to work into a strategy are worth it.

A new report has now shown that retailers may be right in their suspicions, as it generates only a small fraction of sales.

Though this is not to say that things will not change in the future, the Forrester Research report, which was created for Shop.org, a trade group, indicates that sales over mcommerce through smartphones were quite limited last year. Though they did generate $5 billion in sales, this is only a tiny sliver of the total $226 billion online marketplace.

Retailers haven’t given up quite yet as they continue to invest in mcommerce strategies.

In fact, it is expected that the majority of technology spending from retailers in 2013 will be on mcommerce efforts, particularly the basics. This includes product descriptions, improved checkouts, and better overall experiences, said the report. The conclusions made by Forrester were based on a survey of stores that have online operations, in addition to pure plays on the internet.

According to an e-commerce analyst at Forrester Research, Sucharita Mulpuru, “Retailers have been burned getting very, very hyped up over mobile.” The analyst went on to say that “Even though consumers have these phones, the number of transactions on those phones is still small.” 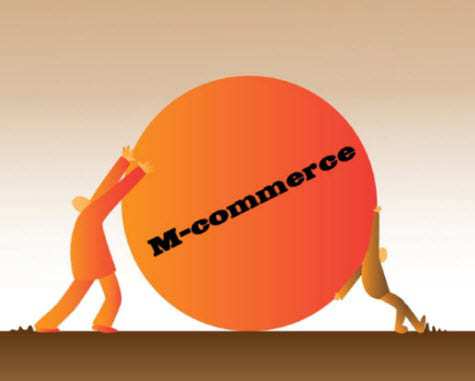 Though mcommerce has been found to have tremendous retail potential, so far the considerable successes have been seen only among a handful of the giants in that area. Amazon, eBay, and other massive marketplaces have seen considerable earnings over the mobile channel, but this is not yet typical across the board.

The mcommerce survey showed that last year, online sales grew by an average of 28 percent over mobile. However, Mulpuru also cautions that this explosive level cannot continue indefinitely. In fact, the number of shoppers who are using their devices to make purchases has started tapering off. Her forecast is that it will reach a limit of 20 percent of the total retail sales, which is about double its current position.