The popular brand has converted one of its bag designs into a black and white plaid scannable barcode.

Quick response codes have taken many forms over the last few years and a new JanSport QR code in the form of a backpack is the next on the list. The popular bag maker is making it easier for students to share some of their favorite digital content such as an Instagram profile, favorite music video, or even their personal website.

This new QR code backpack is one component of a broader project dedicated to using fabrics in a programmable way.

At the moment, the JanSport QR code backpack is still a prototype, but enough success and interest could easily convert this project into the type of product we’ll see on store shelves. The specific quick response code bag prototype was designed as a possibility to consider for changing the way people share their interests. Students frequently use stickers and patches to decorate their bags with symbols and information about things they like. Turning the entire bag into a scannable barcode.

The JanSport QR code bag fabric could alter the way people use their accessories, using them to communicate. 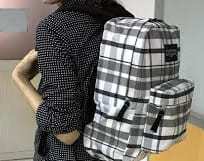 JanSport Americas president, Steve Munn, explained that people usually use backpacks as “a place to put something to eat, something to drink and something to wear … now it becomes potentially an avenue for social interaction.”

To create the backpack fabric, the company worked with Advanced Functional Fabrics of America CEO, Yoel Fink, a professor from the Massachusetts Institute of Technology. The result was a special kind of fabric that could be made into a fully functional bag and that could be scanned as a QR code.

There are currently about 300 prototypes, each of which features a unique design of its own. At the moment, the primary barrier to mainstream JanSport QR code launch is that scanning the backpack fabric requires a special mobile app. This makes the fabric less likely to be scanned than a standard quick response code, which can be read by any number of free reader apps. That said, the developers have reached the point that the fabric can be scanned in the same way as long as the special app is used to point at it.