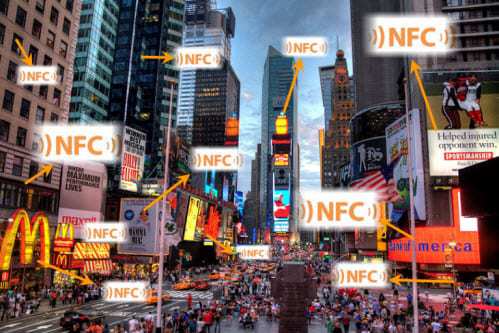 Mobile commerce is a promising new industry that revolves around smart phones being used as payment devices. This is accomplished through NFC technology, which allows smart phones to interact with NFC terminals to make purchases. Mobile commerce is often lauded as a safe, streamlined way to pay for goods, but security concerns have, thus far, stifled the growth of the industry. Despite such concerns, In-Stat, a global market intelligence firm, predicts that there will be more than 1 billion NFC-enabled mobile devices by 2015.

The security concerns surrounding NFC technology are quite valid. The technology manifests as a chip inside of a smart phone, which contains a user’s financial information. As mobile commerce is designed to be a quick and effortless form of payment, NFC-enabled phones only need to be waved in the direction of a payment terminal for a transaction to be completed. New mobile devices, such as iPhones and tablets, are often the target of theft. Should these devices contain financial information, a thief can use it to cause a great deal of stress to the devices owner.

The technology is intriguing, however, and has begun capturing the hearts of consumers, albeit at a slow pace. Telecommunications companies are eager to produce NFC-enabled mobile devices to help society adopt mobile commerce at a quicker pace, In-State notes, as they are hoping to capitalize on what may the once-in-a-lifetime opportunity presented by a commerce revolution.