Consider, if you will, the humble bus shelter. Just a place to stay safe from the elements while waiting for public transportation, and that’s it, right?

Recently, Wal-Mart, in conjunction with Proctor and Gamble, turned 50 Toronto bus shelters into virtual WalMart stores. Talk about a chain having stores everywhere!

Here’s how it worked. Each shelter was given a poster that contained QR codes for Proctor and Gamble products. Commuters who scanned the codes with their smart phones were taken to a Wal-Mart web page that let them buy products online and get free delivery in the process. Why just sit there at a bus shelter doing nothing, when you can shop? Wait for a bus! Kill time! Spend money! Get stuff!

With QR codes popping up everywhere, it’s only natural that they are getting used to increase businesses’ visibility among target audiences in ways that have never been attempted before. The Wal-Mart campaign went after urban shoppers that they normally can’t reach. The shelters chosen were ones located in areas known to have heavy commuter traffic.

So thanks to QR codes, now a simple thing like a bus stop or subway station can be turned into a virtual store. The actual physical set up is simple and straightforward, and if the Toronto campaign is any indication, no special permissions or arrangements are needed with the transportation company, as the posters are part of a single campaign package. 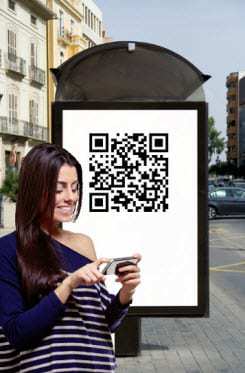 Wal-Mart and Proctor and Gamble aren’t the only companies to dabble in QR code-enabled virtual stores. The Internet grocery service Peapod establish virtual grocery markets in Chicago’s State and Lake Station tunnels. The whole concept is the creation of Tesco, a grocery store chain located in South Korea. Soon, other businesses in the UK, Europe, and Asia began emulating Tesco, and now the practice is hitting North America.

What it all boils down to is QR code-enabled virtual stores are a new marketing development that reaches out to people in the mundane places they frequent on a regular basis in their daily routines, and gives them the chance to accomplish some time-consuming chores (like food shopping) while in transit.

No Place Is Too “Out There” For QR Marketing

The greater the market penetration of smart phones among consumers, the more often virtual stores will become a commonplace aspect of modern shopping. Also, it’s a relatively non-intrusive means of advertising. After all, subway and bus posters have been lurking in the background ever since the first buses and trolleys trundled down city streets. Placing a QR code on a poster and calling some attention to it is a paltry extra effort, especially when one considers the return in terms of exposure for a business.

If QR code advertising catches on in more public transportation facilities, who knows what other public places may get the same treatment? Could it be that somewhere down the road, public bathroom stalls may come equipped with QR posters? If so, maybe the stalls will be called “Go and Shop”.

Byline: John Terra has been writing freelance since 1985,and has covered topics ranging from computer games to .