The results of recent research have shown that people are shopping on their devices at a rapidly growing rate.

According to PayPal and Ipsos research that focused on online shopping spending, mobile commerce is growing at a rate that is almost four times faster than the rate of online spending as a whole.

The study involves an analysis of data as far back as 2013 and a prediction into the future to 2016.

The average compound annual growth rate for mobile commerce spending in the United Kingdom from 2013 to 2016 is predicted to be 36 percent. Comparatively, the same figure for overall online shopping is 10 percent. That said, it is important to point out that in terms of the percentage that m-commerce represents of the whole of online spending in the U.K., the figure remains quite small. The Ipsos and PayPal research show that shopping over smartphones makes up only about 8 percent of the whole of online spending. That figure for tablets is even lower, at 6 percent. Comparatively, shopping over laptops, notebooks, and desktops makes up 86 percent.

Still, it is clear from the growth rate being seen in mobile commerce that this remains a significant channel. 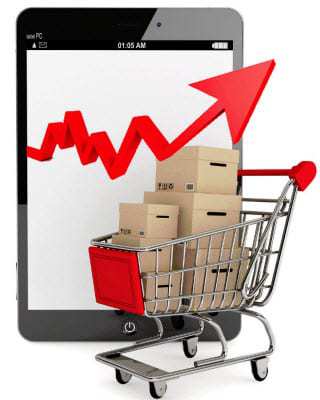 In the United Kingdom, 58 percent of the shoppers who responded to the survey were between the ages of 18 and 34 years whereas they are only 34 percent of the online shopping population as a whole.

Sixty eight percent of mobile commerce shoppers in the U.K. have made a purchase through the use of an app, whereas 48 percent have done so through a mobile browser within the last year. In the group that has used both platforms to buy something, 52 percent said that they prefer the app shopping experience to that provided by a browser.