Kurt Luther, the computer science assistant prof, has developed a free facial recognition software platform that utilizes crowdsourcing to significantly enhance the ability of algorithms to identify faces in photographs. The software program, which is known as Photo Sleuth, was developed by Luther in his efforts to uncover the mysteries of the almost 4 million photographs of Civil War-era images that may exist in the historical record, reports EurekAlert!.

Via Photo Sleuth, users can upload photos, tag them and connect them to Civil War soldiers.

The Civil War Photo Sleuth project was primarily funded by the National Science Foundation. It was officially launched as a web-based platform at the National Archives in Washington D.C. Since August 1, 2018, users of the free facial recognition software can upload photos, tag them with visual cues, and link them to profiles of Civil War soldiers with detailed records of military history.

The initial reference database for Photo Sleuth had reportedly over 15,000 identified Civil War soldier portraits from public domain sources, such as the US Military History Institute as well as other private collections.

The database initially started with over 2,000 Civil War photos and now has over 8,000 photos.

Luther says the reason for Photo Sleuth’s post-launch success is due to building a strong user community. Over 600 users contributed over 2,000 Civil War photos to the website in the first month following the launch and about half of these photos were unidentified.

More than 100 of the unknown photos were connected to specific soldiers. An expert analysis discovered that more than 85% of these proposed identifications were either probably or definitely correct. Currently, the growing database has more than 4,000 registered users and over 8,000 photos.

“Typically, crowdsourced research such as this is challenging for novices if users don’t have specific knowledge of the subject area,” said Luther.

“The step-by-step process of tagging visual clues and applying search filters linked to military service records makes this detective work more accessible, even for those that may not have a deeper knowledge of Civil War military history.”

Luther, who is also a history buff, said that he was inspired to develop the free facial recognition 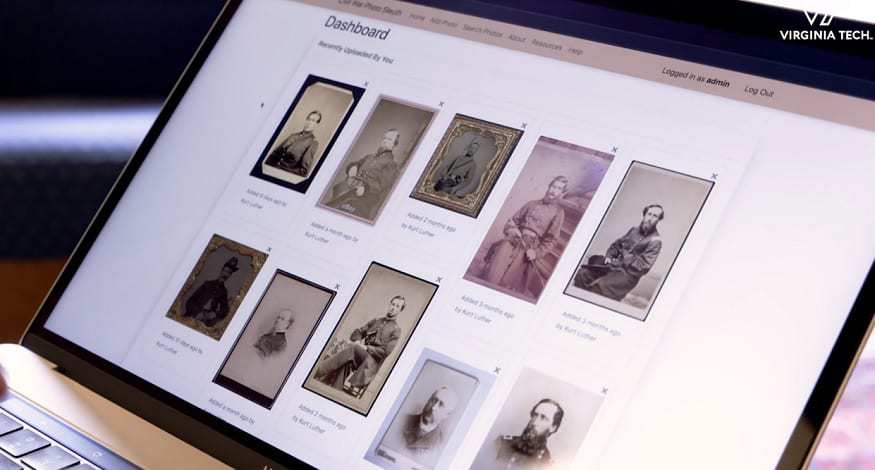 software back in 2013 while visiting the Heinz History Center’s exhibit, “Pennsylvania’s Civil War” in Pittsburgh. At the exhibit he happened to find a Civil War-era portrait of his great-great-great uncle, Oliver Croxton, who served in Company E of the 134th Pennsylvania.