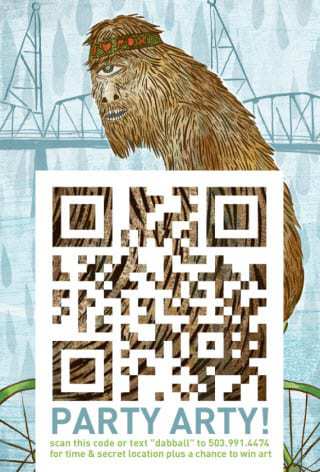 Last week, strange postcards began showing up in Portland, Oregon. The cards are tagged with a “Party Arty” slogan as well as a QR code. The code, when scanned with a smart phone, resolves to a mobile website that lists an address, date and time. While it all seems very cryptic, it is, in fact, a campaign sponsored by LynkSnap, a mobile technology company, and 40 artists from around the world. The campaign promotes an improvised art gallery that opened last week.

QR codes have become quite popular tools for flash mobs. Flash mobs are groups of people that meet in secret and gather at a specified location to conduct some kind of performance. Generally, these performances come in the fashion of song and dance routines that leave passersby astounded and slightly confused. This event, however, is an art gallery through which people were exposed to works they may not have ever seen otherwise.

The event lasted a mere two hours, but attracted several hundred people. The location of the event was only advertised through postcards attributed with QR codes. Upon scanning the codes, smart phone users were given an address, time and date as well as a number of pictures that would let them know what to expect upon reaching the event location.

Using the codes in this way is certainly innovative, but there is a danger that such campaigns could fail as more consumers are treating unknown QR codes with disdain given the rising threat of cybercrime.