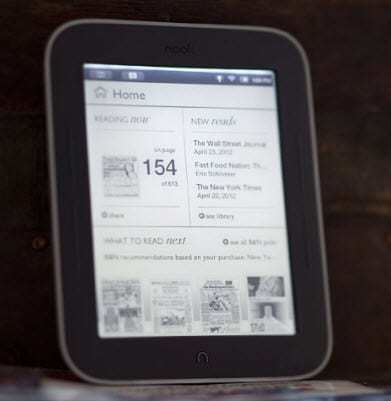 Book retail giant Barnes & Noble has announced plans to make improvements to its Nook e-reader device. The Nook has become popular amongst book enthusiasts because it enabled them to store thousands of their favorite stories and access these stories from wherever they are at the time. The device has been praised for its convenience and has long been well-received by consumers, but Barnes & Noble believes that the platform can be improved. To this end, the retailer has announced that new generations of the Nook with feature NFC technology.

Barnes & Noble to work with publishers to expand NFC to books

The company plans to begin embedding NFC chips into new Nook platforms within the next year. The retailer has also expressed a desire to work with major publishing houses in order to encourage these companies to include NFC chips on the covers of published works. When the Nook interacts with these chips, users will be able to access exclusive content. This content can be anything from an interview with the author or never before seen pictures or notes concerning the book.

Barnes & Noble is currently working to transform its business into one that is more accommodating of the digital world. Companies like Borders have not fared well in the advent of technology, partly due to their reliance on physical book sales. More consumers are being won over by digital books. By adopting mobile technologies like NFC, Barnes & Noble believes it can appeal to tech-savvy consumers. The company believes that physical stores still have the capability to compete with online retailers, such as Amazon.

NFC technology is most commonly used in the mobile commerce industry. The technology has been one of the driving forces behind the progress and growth of mobile payments. The technology is also a popular mobile marketing tool due to its penchant for interactivity. Barnes & Noble believes that the technologies interactivity can be used to attract consumers that are growing more reliant on mobile devices.