Barclays, one of the largest financial service institutions in the United Kingdom, is bringing mobile payments to taxis in London. The city’s famed black cabs will now be able to accept payments from mobile devices using the Pingit application. Consumers with an account with Barclays can download the application and use it to make a payment by simply scanning a QR code. This process can be completed in less than 30 seconds.

Black cabs in London will be affixed with QR codes that can be scanned by the Pingit app. Each code will be unique, effectively identifying the cab that someone is riding in. QR codes are most often used in the marketing field and have proven that they can connect with consumers quite effectively. These codes are beginning to see more use in the mobile commerce space because of their convenient nature, which aligns well with the basic premise of mobile payments. 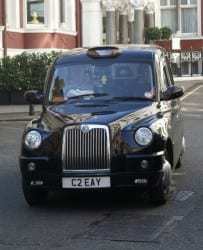 Commerce in the United Kingdom is becoming more mobile. According to recent research from the Center for Economic and Business Research, some 20 million people are expected to use their mobile devices to pay for goods and services by 2020. A growing number of people are relying on their mobile devices in their daily lives, using these devices to stay in touch with loved ones and to entertain themselves. This reliance on mobile technology is beginning to have an impact on how commerce functions.