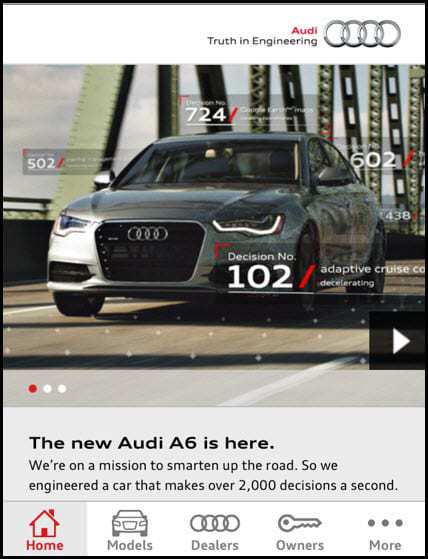 Audi may be best known for its vehicles, but like most other automakers it is not only interested in designing luxury cars. Honda, for instance, has its hands in a vast array of technological endeavors while its competitors pursue interests in renewable energy, space flight, and even geo-engineering. Audi has adopted a strong interest in augmented reality, believing that the technology is well suited for creating highly interactive digital experiences. Instead of relying on third parties to develop such experiences, however, Audi has developed its own augmented reality platform.

Audi’s platform is called Audi Vision and it is designed as a mobile augmented reality system that allows users to access dynamic digital content. Those with smartphones and tablets will be able to use Audi Vision to find this content in the automaker’s spring 2013 price and specifications guides, as well as the company’s various brochures. The digital content contained in these materials will range from videos and pictures to simple text, all superimposed over the real world.

Augmented reality continues to be a powerful marketing tool

Augmented reality has become an effective marketing tool, showing that it is more than able to engage a wide range of consumers. As these consumers have become more tech-savvy, they have become more interested in dynamic digital content, which can only be provided through the use of augmented reality. Audi has taken a strong interest in this technology for this specific purpose and believes that it will be able to engage luxury consumers in a new and effective way.

Audi is not alone in its interest in augmented reality

Audi is not the only automaker to be using augmented reality, of course. Last year, Japanese automaker Toyota launched an augmented reality marketing campaign that features one of Japan’s largest pop idols: Hatsune Miku. Miku is, in fact, an entirely digital figure and has often been the subject of augmented reality campaigns in the past. Beyond marketing, Toyota has also been working to incorporate the technology into the windshields of its future vehicles to provide consumers with information while driving.