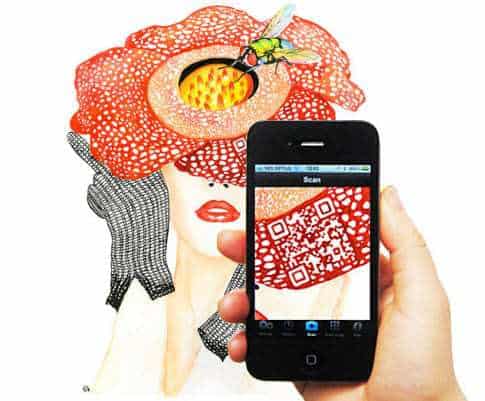 Yiying Lu has released another art project that includes the barcodes in the artwork.

QR code art has been taken to another level by Yiying Lu, who has just released her latest project which is a collection called “Beautiful Traps” which integrates fashion and nature while being fully scannable.

The pieces are worked into combination watercolor and marker paintings depicting women wearing carnivorous plants as their hats.

Integrated into the headwear of several of the women are the quick response codes.

The QR code art is created entirely by hand, but is fully functional and can be scanned by either a tablet or a smartphone. The creation of the entire collection was recorded as a video which is just over five minutes in length, but is fascinating enough to make it worth the time it takes to watch it.

This isn’t the first time that Lu has created artwork that integrates the barcodes.

In July 2011, Lu also made the news following the creation and release of “Fail Whale” on Twitter. This collection was a series of illustrations of celebrities in the fashion industry, such as Mary-Kate and Ashley Olsen, and Anna Wintour. Each of the drawings was featured within that month’s Meets Obsession magazine issue and had a quick response code worked into them somewhere.

For example, the famous twins and child stars had their two unique codes worked into oversized earrings that hung from their ears. On the other hand, Anna Wintour – American Vogue’s editor-in-chief, and the suspected inspiration for Meryl Streep’s icey “dragon lady” character in The Devil Wears Prada – was drawn to have her sweater scanned.

The QR code art is quite subtle so that it is certainly a barcode worked into a larger piece of artwork, and is not simply a drawing or painting wrapped around the mobile friendly square. The main focus of the piece is clearly the image itself, in this case, women with large floral hats of Venus fly traps and other carnivorous flowers, often with insects approaching their doom. However, at a second glance, it becomes quite obvious that there is an additional feature available in the piece, piquing the curiosity and encouraging a scan. 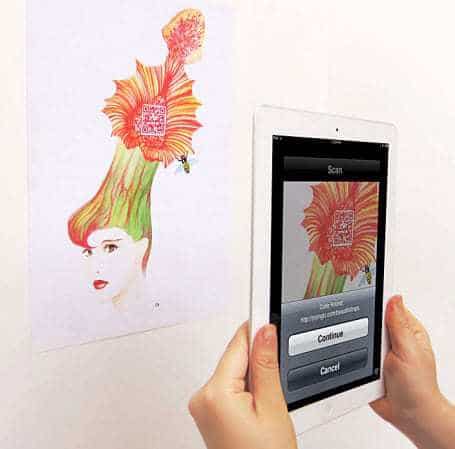