The online marketplace has been looking into this delivery technology for some time and is filing many patents.

At this point, it doesn’t come as a surprise to many that Amazon drones are in the works at the massive online marketplace, which loves to invest in the creation of new and potentially revolutionary forms of technology, but recent patent application publications have revealed a great deal more as to the way that the delivery system could end up functioning.

These UAVs (unmanned aerial vehicles) may be able to track a customer’s smartphone to determine his or her location.

The idea is that a package could be delivered via Amazon drones to wherever the customer happened to be located at the time. This means that customers wouldn’t have to wait at home for the mail or the courier to arrive. The UAV would use the customer’s smartphone to determine the location and then travel to that spot. Of course, this is only the assumption that is being made based on the patent applications that have been published. It is important to keep in mind that these are merely concepts that are being explored by the company and that it is not yet possible to know exactly what the company plans to do with those ideas.

It hasn’t yet been confirmed that Amazon drones will ever actually become the program that is currently being researched. 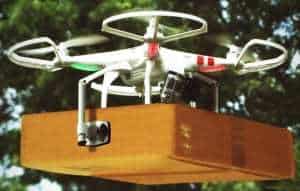 That said, the company has been looking into a number of different types of related technologies and has been applying for a broad spectrum of different patents, including for smartphone tracking and for drone-to-drone communication, which would allow the delivery robots to communicate to each other about various issues such as potential weather problems or traffic snarls. In that way, a drone that is already out on a job could report back to drones that are just leaving the warehouse in order to warn them about a storm that is settling in, for example.

The potential could also mean that a product could be purchased over mobile commerce channels and the products that were purchased could be sent directly to the smartphone that made the order. If the customer is not located in a place where he or she would like to receive the package, then a number of other options could also be provided, such as having the Amazon drones leave it in the backyard, instead. Of course, this is all assuming that the company will be able to obtain the necessary regulatory clearance to implement the program, in the first place.