The fast food chain employed a unique strategy for connecting with the event’s viewers.

Brand mascot and Lil Yachty made an unlikely appearance together at the MTV Video Music awards alongside on air Burger King QR codes.

The barcodes were used to allow viewers to scan using smartphones to gain various discounts.

Attention was drawn to the Burger King QR codes through giant royal mascot and popular rapper. Together, they took over the MTV Video Music Awards (VMAs) by way of augmented reality appearances last Sunday night.

The VMAs are the traditional launch of the extended awards season every year. This year, the event was held quite differently due to the COVID-19 pandemic crisis. To help ensure all employees and guests remained properly physically distanced, the event was held at various outdoor pop-up locations throughout New York City. Among the locations where the event took place included the Brooklyn waterfront and Hudson Yards. Even some of the stars’ own homes were included as locations.

The Burger King QR codes appeared alongside digital versions of the King and Lil Yachty.

The augmented reality renderings of Lil Yachty and the King mascot were developed and designed by Coffee, a digital content and experience agency. The quick response barcode campaign was developed by a partnership between the fast food chain and MullenLowe.

The mascot and Lil Yachty appeared together on the red carpet before the show began, as well as at various show locations throughout its length. Once the rapper performed “Top Down,” he received the Burger Fire Medallion, which was presented to him by the King.

The Burger King QR codes were all a part of a consumer promotion at various times throughout the broadcast. To take part, viewers were encouraged to download the brand’s app. With it, they could scan the quick response barcodes when they appeared on their screens. With each scan, they could receive 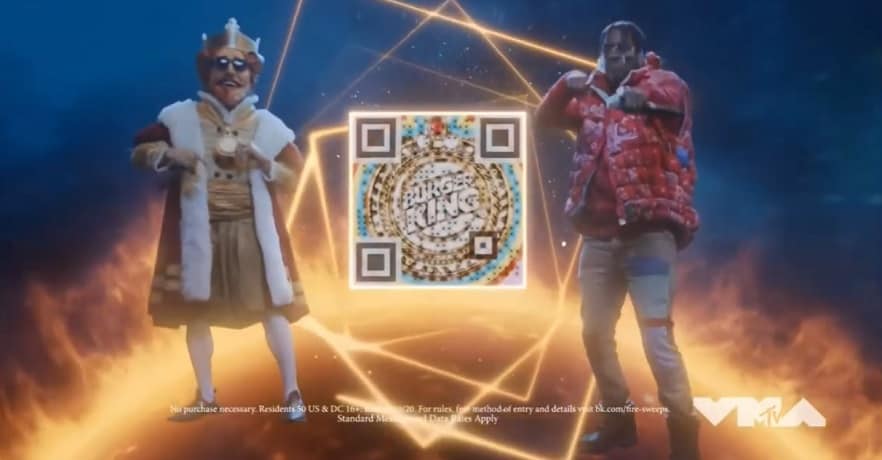 discounts and free items, such as a free Whopper with a $1 purchase. The scans also gave viewers the chance to enter a sweepstakes for a year of free Whoppers and tickets to attend the VMAs next year.